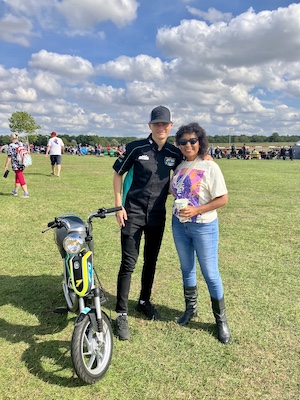 The third and final part of our interview series featuring British Superbike racer Ryan Vickers - a project we have been producing for Boniface Engineering's 40th anniversary in 2022 - is out now.

Both Boniface Engineering and Ryan are from Thetford, and Boniface have been sponsoring Ryan in the Bennetts British Superbikes Championship for a number of years. Just before their season got underway we sat down with Ryan to find out more about the challenges, successes and key points in his motorbike racing career so far. Ryan also made his first appearance in the World Superbike Championship earlier in 2022.

Boniface Engineering was US2U Consulting's first client back in 2006, so we are delighted to have been tasked with scripting, filming and producing this interview series. This email address is being protected from spambots. You need JavaScript enabled to view it. with us to find out how engaging video content can help elevate your organisation's message.

Watch 'Part 3: Speeding Into The Future' below - click here to revisit Part 1 and Part 2 here.

The current Bennetts British Superbike Championship will be running over the next few months and airs on Eurosport on race weekends - featuring the Boniface Engineering 40th anniversary logo that we designed, which Ryan proudly wears on his helmet during races.

This interview episode was released at the weekend to coincide with the Snetterton meetup on the British Superbikes circuit - Ryan's local track. Unfortunately Ryan suffered a concussion in Race 1 on Saturday 10th September so was forced to miss Races 2 and 3 on Sunday - much to the disappointment of many local fans who were looking forward to seeing him in action. Nevertheless we look forward to continuing to watch him on Eurosport over the rest of this season and seeing him at Snetterton in future seasons!