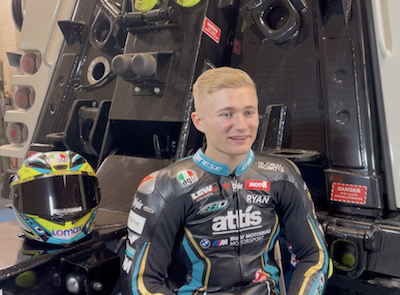 The second part of our interview series featuring British Superbike racer Ryan Vickers - a project we have been working on with and producing for Boniface Engineering - is out now.

Both Boniface Engineering and Ryan are from Thetford, and the US2U Consulting-produced interview series comes as part of Boniface's 40th anniversary celebrations this year. They have been sponsoring Bennetts British Superbikes contender Ryan for a number of years, so just before their season got underway we sat down with Ryan to find out more about the challenges, successes and key points in his motorbike racing career so far.

Boniface Engineering was US2U Consulting's first client back in 2006, so we are delighted to have been tasked with scripting, filming and producing this interview series. This email address is being protected from spambots. You need JavaScript enabled to view it. with us to find out how engaging video content can help elevate your organisation's message.

The current Bennetts British Superbike Championship will be running over the next few months and airs on Eurosport on race weekends - featuring the Boniface Engineering 40th anniversary logo that we designed, which Ryan proudly wears on his helmet during races.